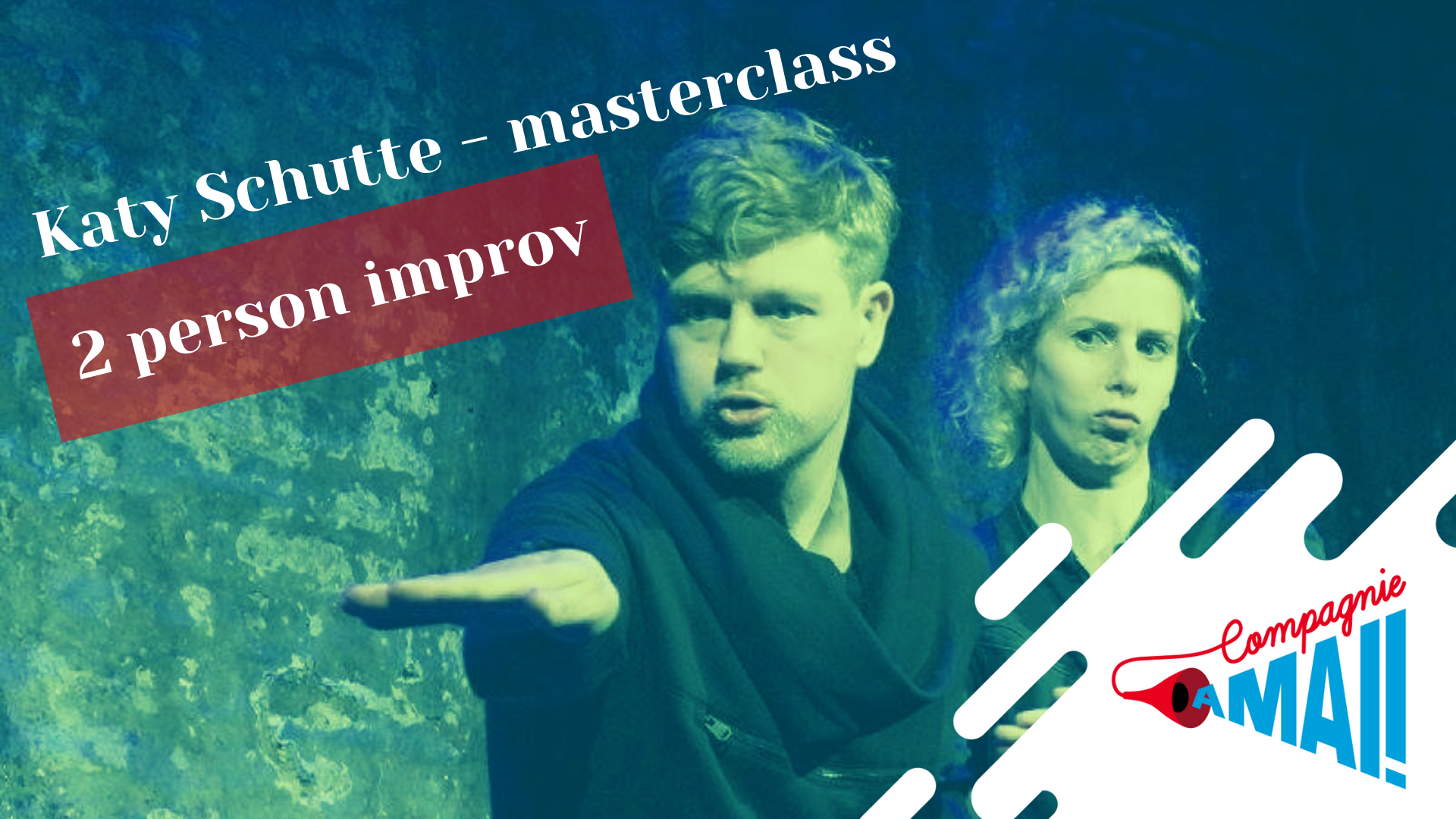 With only two performers, how can you move fluidly from one scene to another, how do you hold more than two characters in one scene, what can you do with object and environment and what is your show’s dynamic?  Working on techniques for rehearsing and performing two-person improvisation, this workshop builds your trust and skills around that one other person.

A 3 hour workshop to introduce people to twoperson improv.

Katy Schutte is one of the UK’s top improvised comedy performers and teachers. She tours shows and classes around Europe and the US and teaches with Hoopla and The Maydays in the UK. Katy trained at Second City and iO Chicago and with teachers from the Annoyance, UCB, Groundlings, The Magnet and lots of other places.

Improvisation:
Katy has been one of The Maydays since 2004 and is currently Co-Artistic Director, she is half of sci-fi improv duo Project2. She played in slow burn long form show Katy and Rach for over a decade, has toured with Fluxx, improvised musicals with Music Box and Baby Wants Candy, co-created the Destination podcast and has guested in countless shows including Messing with a Friend, Criminal, The Playground, the London and Liverpool Improvathons, Grand Theft Impro, Séance Fiction, Whirled News Tonight and The Armando Diaz Experience. Katy has written a book called The Improviser’s Way: A Longform Workbook which is published by Nick Hern Books.

Awards:
Katy is a Funny Women finalist and both nominee and winner of the Brighton Festival Fringe Best Comedy Show award. She starred in online educational series History Bombs which won a BAFTA.

Sketch Comedy & Writing:
For two years, Katy performed with and wrote for Brighton sketch satire company the Treason Show.  In 2011 she wrote and performed with Fringe First winner and Perrier nominee NewsRevue at the Canal Cafe Theatre. As above, she has performed in educational comedy shorts with History Bombs. Katy is a contributing writer for the popular card game Cards Against Humanity and is currently co-creating indie series Sideliners.

Theatre (Acting, Writing, Directing):
In 2012 & 13 Katy co-created and directed The Watery Journey of Nereus Pike starring Fringe First winner Laura Mugridge. She also made three interactive audio shows with Tony Harris for The Campsite at the Ipswich Pulse Festival, the Natural History Museum and with Curating Cambridge. Katy performed at the Edinburgh Festival Fringe in 2013 & 2014 with her first musical Who Ya Gonna Call? which received rave reviews and left standing room only. She has also written I Have an Idea for a Film and her award-nominated stand-up and storytelling show Schutte the Unromantic. Katy is currently touring her acclaimed semi-immersive folk horror play Let’s Summon Demons. She regularly performs in nerdgasm Knightmare Live, and The Maydays’ international hit improv show Happily Never After. Katy is currently working with The Old Market and Damien Goodwin on AR/VR/immersive show The Time Machine and in Cast Iron Theatre’s One Woman Alie